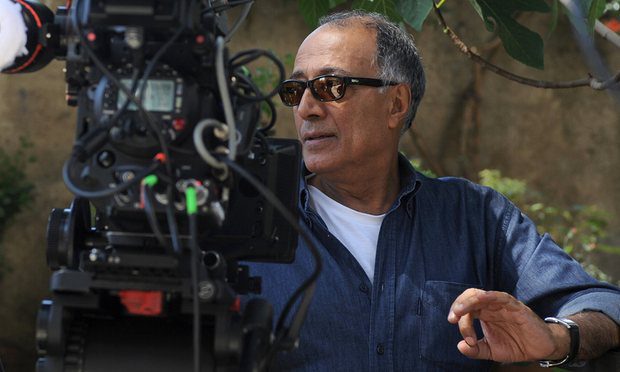 Abbas Kiarostami, the multi-award-winning Iranian director whose 1997 film Taste of Cherry was awarded the Palme d’Or at the Cannes film festival, has died aged 76.

“Abbas Kiarostami, who had travelled to France for treatment, has died,” reported the semi-official Isna news agency on Monday. Iran’s house of cinema confirmed the report, Isna said. Kiarostami had been diagnosed with gastrointestinal cancer in March 2016, and had undergone a series of operations, including in Paris last month.

Speaking to the Guardian from Tehran, Oscar-winning Iranian film-maker Asghar Farhadi – who had been due to fly to Paris to visit his friend later tonight – said he was “very sad, in total shock”.

“He wasn’t just a film-maker,” Farhadi continued, “he was a modern mystic, both in his cinema and his private life.” Farhadi said Kiarostami’s success enabled many generations of Iranian film-makers: “He definitely paved ways for others and influenced a great deal of people. It’s not just the world of cinema that has lost a great man; the whole world has lost someone really great.”

Mohsen Makhmalbaf echoed the sentiment, saying Iran’s cinema owes its global reputation to his fellow director, but that this visibility did not translate into a greater visibility for his work in his homeland.

“Kiarostami gave the Iranian cinema the international credibility that it has today,” he told the Guardian. “But his films were unfortunately not seen as much in Iran. He changed the world’s cinema; he freshened it and humanised it in contrast with Hollywood’s rough version.”

“He was a man of life, who enjoyed living and made films in praise of life – that’s why it’s so difficult to come to terms with his death,” he said.

Kiarostami’s rise to the status of one of the world’s foremost auteurs started from relatively humble beginnings. He was born in 1940 in Tehran, and originally studied painting at the University of Tehran; Kiarostami began working as a graphic designer and went on to shoot dozens of commercials for Iranian TV. In 1969 he joined Kanun (the Centre for the Intellectual Development of Children and Young Adults), where he ran the film department, and was able to make his own films. In 2005 Kiarostami told the Guardian: “We were supposed to make films that dealt with childhood problems. At the beginning it was just a job, but it was the making of me as an artist.”

In the two decades he worked for Kanun, Kiarostami made films continuously, including his first feature, The Report, in 1977. He managed to negotiate the transition triggered by the Khomeini revolution, re-working the films he made to try and accommodate the demands of a new set of censors. Unlike many of his film-industry peers, Kiarostami decided to remain in Iran after the revolution, likening himself to “a tree that is rooted in the ground”. “[If you] transfer it from one place to another, the tree will no longer bear fruit … If I had left my country, I would be the same as the tree.”

It was while he was at Kanun also that Kiarostami embarked on what would become known as the Koker trilogy, the three films that established his international reputation as a director of considerable sensitivity and intellectual rigour. The first, Where Is the Friend’s Home?, was completed in 1987, and its sympathetic story of a schoolkid’s attempt to return a classmate’s exercise book, won Kiarostami’s first major award, the Bronze Leopard at the Locarno film festival. Life, and Nothing More…, finished in 1992, saw him blend fiction and documentary in his account of his search for the earlier film’s cast after the devastating earthquake of 1990, while 1994’s Through the Olive Trees revolved around the making of a fictional second instalment of Life, and Nothing More

However, the hostile censorship climate meant he had already left his job at Kanun, shortly after completing another film, Homework, in 1989. Close-Up, from 1990 was an agile docu-fiction about a man who had been put on trial for impersonating Kiarostami’s fellow film-maker Mohsen Makhmalbaf. At the same time, Kiarostami wrote and produced films by other directors, most notably The White Balloon, the 1995 directorial debut of Jafar Panahi, who had worked on Through the Olive Trees as an assistant director.

Kiarostami’s upward ascension as a major auteur was confirmed in 1997, when his seventh feature, Taste of Cherry – a study of a man driving around looking for someone to help him commit suicide – was awarded the Palme d’Or (jointly, with The Eel, directed by Shohei Imamura).

Kiarostami’s subsequent career alternated between formal features, such as the poetic drama The Wind Will Carry Us and Ten, which exploited Kiarostami’s fondness for filming and photographing in cars, and outside ideas such as ABC Africa, which arose after Kiarostami was invited to film Aids orphans in Uganda, and Tickets, a three-part film made with Ken Loach and Ermanno Olmi. He also moved into what can only be described as minimalist documentary with Five (subtitled Dedicated to Ozu), which comprised a series of lengthy shots of Spanish landscape, and Shirin, composed of a series of headshots of women watching an unseen film.

Related: Cannes 2012: Abbas Kiarostami: ‘The world is my workshop’

Latterly, Kiarostami found it increasingly difficult to film in Iran, as political strife grew in the wake of Mahmoud Ahmadinejad’s rise to power. His next two films, Certified Copy and Like Someone in Love were filmed abroad, in Italy and Japan respectively, even if they dealt in Kiarostami’s familiar themes of authenticity and relationships. Both were screen at Cannes, and the former won the festival’s best actress award for Juliette Binoche.

Last week, Kiarostami was among 683 film-makers asked to join the Academy of Motion Pictures and Sciences; many commented on the belated nature of the invite.

Kiarostami was married once, in 1969, to Parvin Amir-Gholi, but they divorced in 1982. They had two sons together: Ahmad (a mulitmedia publisher) and Bahman (a documentary-maker).