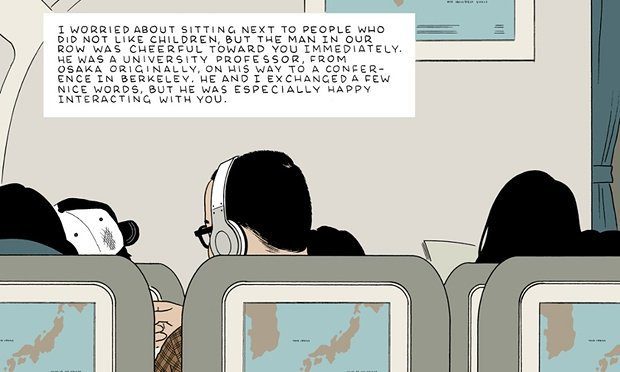 Brooklyn-based cartoonist Adrian Tomine has been drawing professionally since he was in high school. Now, at 41, he’s an in-demand illustrator whose work regularly graces the covers of the New Yorker and classy Criterion Collection movie re-releases. But his first love remains comics, and his ongoing series Optic Nerve has thrived creatively even as many of his contemporaries shift their attentions away from periodicals and toward standalone books.

His new collection of short stories, Killing and Dying, is about as pure an expression of that love as an artist has produced during the recent boom in literary comics. Far more diverse in style than anything yet from the notoriously meticulous artist, Tomine’s six stories about people striving and failing span four years of the author’s life, and mark a significant change in the way he works.

This book is really experimental in a way I didn’t see in your last collection of stories, Summer Blonde, or your graphic novel Shortcomings. What made you change the way you worked so radically?

Shortcomings. Even though it’s a slim book, I spent several years working on it and by the end I was just cursing myself. I mean, not only is everything drawn very realistically but I, for God knows what reason, decided that all the locations had to be actual and accurate. Pretty much every place in every scene is a real location either in California or here in New York and also sort of proportionally correct, which is madness, because no one has ever noticed and no one even really cares once I explain it to them. When I finished that book I vowed that whatever I did next, I would have the freedom to approach portions of the book in different ways. If I’d had to do Shortcomings, part two, I wouldn’t have made it to the end.

You have a couple of failed artists in here, between the awful standup comic in the title story and the inventor of “hortisculpture”. Why are you so interested in egregious failure?

Because it’s always in the back of my mind. I think it became even more pronounced once I became a father. There’s never been a moment where I sat down at my drawing board and thought, “I’m a pro!” I still find it hard to believe I’ve made this my job. Ninety percent of the time when I’m working, there’s this very palpable sensation that I’m doing everything wrong and should just give up. I don’t know if you saw Birdman, but you know how the superhero character is always pushing him? I have a version of that, but instead of it constantly saying, “Oh, you’re a star and you’ve made billions,” it’s more like, “Give up! You suck!”

I both loved and utterly hated the main male character in Go Owls; you can kind of see what his girlfriend sees in him, but he’s also such a son of a bitch.

That’s a great compliment; I had originally thought it was going to be about some of his darker moments, and then I thought, “That’s really not fair. It’s not worth telling if it’s just, ‘Here’s this asshole and here are some of the horrible things he does.’”

All these stories end on moment of ambiguity.

It probably depends on how optimistic or pessimistic the reader is. The goal, throughout this book, was to muddle people’s reactions intentionally rather than saying, “Here’s a funny uplifting story” or “here’s a downer”.

I was almost mathematical in trying to find a balance between the extremes. In Go Owls, for example, the subject matter is pretty dark, but I think there’s a lot of jokes interspersed, and I intentionally pushed the drawing style toward a more simplified, cartoony aesthetic. If it was drawn in the style that I drew Shortcomings, I think it would be unbearable to see very realistic depictions of those characters doing some of those things. It would be distracting.

Whereas in Translated from the Japanese you have a really intricate depiction of totally mundane things.

That’s the one area where I allowed myself to use the same style I use in my illustration work, where everything is pretty realistic and detailed and whatever the subject matter is, I’m trying to make it as beautiful as possible, even if it’s just a picture of a coffee cup on an airplane tray table. That kind of thing is much more in line with what I’m doing with a New Yorker cover.

It did. But that was by design. Prior to that story I was trying to draw some of the other stories in Killing and Dying in a really economical, quick way, and I’d be like, “Well, I didn’t really capture all the details in the background that I wanted, but let me just economically move the story along.” And then I would have to take a break and do an illustration for the New Yorker and I would lavish weeks on a single image. I would draw the foliage just right and go through several rounds of colour proofing so I could get the colours just right. I was starting to feel a little jealous that I was lavishing so much attention on someone else’s publication and I was curious to see what would happen if I put that kind of attention onto something I had written myself.

How much of continuing to do comics is a labour of love, given your profile at the New Yorker?

The comics work is very slow and it basically involves working for sometimes years in isolation and not knowing how the work is going to be received. When it does come out, it’s an uphill battle to get it into the hands of readers, because it’s still not exactly material that’s going to appeal to the guys who go every Wednesday to get Marvel and DC comics.

You’re not in the majority! I think the response I get to one New Yorker cover outweighs five books that I publish. The reason I’ve been able to juggle those aspects of my career is that I’ve really lucked into two similar, simpatico working relationships.

Did you touch up or change any of the stories from Optic Nerve, or the story from Kramers Ergot, Amber Sweet?

There are minor changes between how they appeared in Optic Nerve but that Amber Sweet story is pretty much redrawn and rewritten from the way it first appeared. I was pretty unhappy with the way it came out and I allowed myself that, because I thought few people would have sprung for the Kramers [the issue of the eccentric anthology in which Tomine’s story appeared was 16×21 inches and cost $125 at retail].

When did you decide to make these stories a book?

I was always thinking of it as a book. Even though it’s short stories, I wanted them to feel somehow of a piece and I wanted them to all make sense under the one cover rather than just “Here’s whatever random stuff I did for the last few years!”

What unites the stories here?

I hate to overexplain anything, but the stories that are narrated from the first person are definitely written in character. One of the common elements in this book is that all of the stories are sort of indirect. What I’m trying to do is sort of imply a story through the pinhole of one character’s point of view. A lot of the stories have some sort of misdirection where maybe at first you think [the title story] is all about comedy, and it’s a fake-out. There are a lot of other things going on, and the fact that they’re not the focus is part of the story, I think.

I quickly felt like I was sort of painting myself into a corner, that the younger version of me would try to jump out of and say, “Oh, this is a little too difficult and I’m going to just skip it.” And then I sort of enjoyed that feeling of maybe biting off a little more than I could chew and sort of struggling to figure out how I could manage it. The story Killing and Dying is another good example of that. I had a version of it that I’m sure a younger version of myself would dismiss and I thought, “Well, I’m 40 now. Let’s see if I can handle it.”